Continuing in its policy of making the environment increasingly welcoming and at the same time reducing management costs, the Resort Management, given the good results obtained with the first intervention, decided to complete the water treatment of the wellness center.

A few months before this decision, the maintainer had decided to install a softener, a system that, apart from the heavily negative side effects, is normally useful to prevent the formation of limestone, provided that it is properly sized based on actual use water, that the exchange resins are correctly replaced when exhausted, that salt is fed correctly and, finally, that it is correctly calibrated.

Operations that are all far from obvious so much is that something seemed to not work as expected, hence the decision to adopt AQUARING and deactivate the softener.

The only point to have immediate feedback is found in a HARVIA steam generator: a transparent silicon cup is installed under the machine, where you can see any material that precipitates. 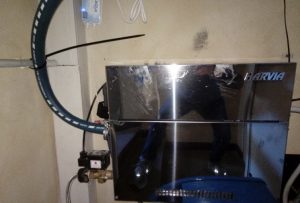 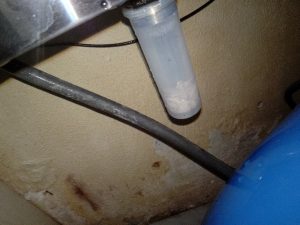 It is evident that in the bottom of this container, which has not been opened, there are deposits of limestone that presents itself in the form of crushed stone.

Below we publish some photos of the silicon cup and of the material found inside, made after less than a month from the commissioning of AQUARING H 25: clearly the quantity is definitely higher and, what is more interesting, the quality is completely different , it is no longer a question of crushed stone but of curved pieces that let us understand how they are detached from the pipe whose curvature they keep. 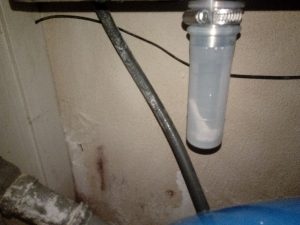 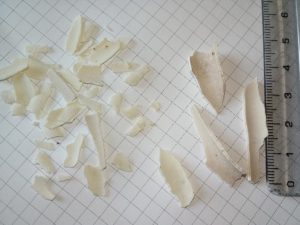 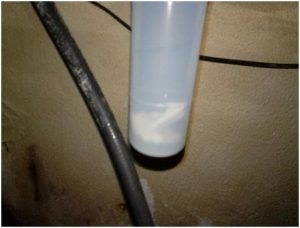 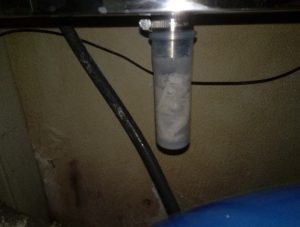 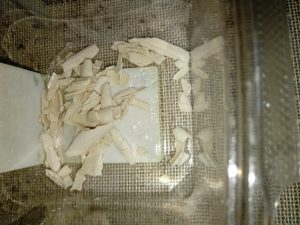 The conclusion that can be drawn is undoubtedly that it was very appropriate to install AQUARING which caused the inhibition of the formation of new limestone and began the unraveling of the pre-existing limestone, limestone that had reduced the section of the adduction pipe but above all the capacity of exchange in the steam generator with consequent considerable increase in energy costs: one mm of limestone increases the cost of energy by 15%.

The softener had not presumably brought any benefit, it had given the hope of having eliminated the limestone but, on the contrary, a probable incorrect operation, gave a very different reality.

This situation is related to a steam generator, it will be interesting to monitor it in the future and inspect the second in order to verify what happened because with this production of limestone there is a good chance that if it does not have the possibility to exit the pipes, there is a large reduction in section and therefore in flow, at least until, with time, it has completely melted.

We use cookies on our website to give you the most relevant experience by remembering your preferences and repeat visits. By clicking “Accept All”, you consent to the use of ALL the cookies. However, you may visit "Cookie Settings" to provide a controlled consent. Read More
Cookie SettingsReject AllAccept All
Rivedi il consenso

This website uses cookies to improve your experience while you navigate through the website. Out of these, the cookies that are categorized as necessary are stored on your browser as they are essential for the working of basic functionalities of the website. We also use third-party cookies that help us analyze and understand how you use this website. These cookies will be stored in your browser only with your consent. You also have the option to opt-out of these cookies. But opting out of some of these cookies may affect your browsing experience. For more details visit the Cookie Policy page
Necessary Sempre abilitato
Necessary cookies are absolutely essential for the website to function properly. These cookies ensure basic functionalities and security features of the website, anonymously.
Functional
Functional cookies help to perform certain functionalities like sharing the content of the website on social media platforms, collect feedbacks, and other third-party features.
Performance
Performance cookies are used to understand and analyze the key performance indexes of the website which helps in delivering a better user experience for the visitors.
Analytics
Analytical cookies are used to understand how visitors interact with the website. These cookies help provide information on metrics the number of visitors, bounce rate, traffic source, etc.
Advertisement
Advertisement cookies are used to provide visitors with relevant ads and marketing campaigns. These cookies track visitors across websites and collect information to provide customized ads.
Others
Other uncategorized cookies are those that are being analyzed and have not been classified into a category as yet.
ACCETTA E SALVA